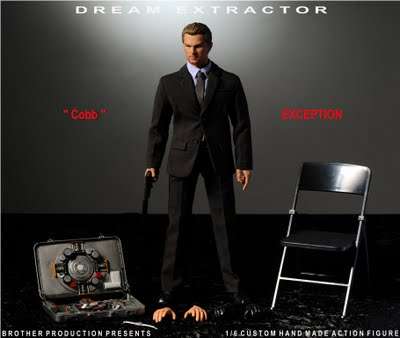 Jason Soy — August 7, 2011 — Pop Culture
References: figures.collected.info & toyhaven.blogspot
If you can't get enough of the Inception universe, maybe this Dom Cobb figurine is your answer, as you can now imagine storylines that feature the dream "Extractor."

Designed by Brother Production, the Dom Cobb Figurine is a 12-inch figurine created in the likeness of Leonardo Dicaprio. Several props found in the film also come as accessories for the toy, including the "Dream Share" briefcase, Cobb's gun of choice and the spinning top "totem," which had fans questioning whether the entire movie was a dream or reality.

Implications - Consumers enjoy collecting toy figurines because it allows them to own a product associated with a franchise they enjoy. Corporations may find it much more easier to sell their wares if they manage to purchase licenses for pop culture franchises.
1.8
Score
Popularity
Activity
Freshness

Roulette Wheel-Integrated Watches
The Astronomia Casino Watch by Jacob & Co. is Priced at $620,000