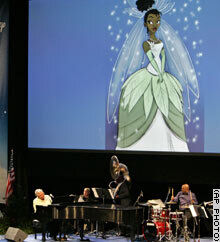 Trend Hunter 2602 — March 16, 2007 — Pop Culture
References: cnn
Disney's gone and done it! Walt Disney has announced their first black princess in the animated film "The Frog Princess" which will be set in New Orleans. The film is described as, "an American fairy tale," according to chief creative officer for Disney and Pixar Animation Studios, John Lasseter.

Implications - Much like the classical fairy tale, the story centers on a young girl named Tiana who kisses a frog prince with many adventures that follow after that fateful night. The movie will be scored by Randy Newman, the man behind the music of other well-known titles that include Toy Story and Monsters Inc. Expect a lot of jazzy tunes since the plot takes place in the jazz era of New Orleans.
2.6
Score
Popularity
Activity
Freshness