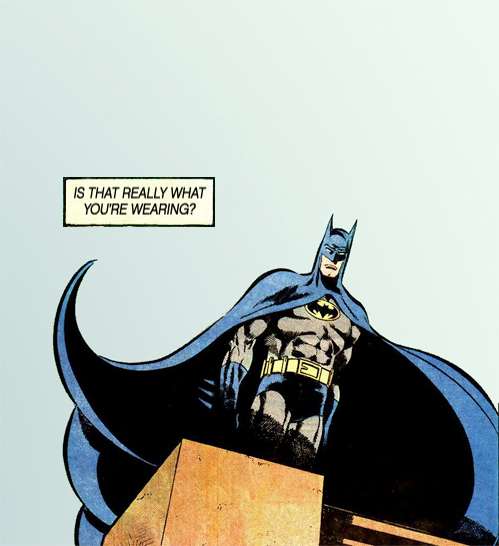 The Disappointed Dad Batman Meme is a Hilarious Interpretation

Corinne Guirgis — August 7, 2011 — Pop Culture
References: burbanked.tumblr & buzzfeed
Share on Facebook Share on Twitter Share on LinkedIn Share on Pinterest
If you've ever asked yourself what it would be like if Batman became a dad, this disappointed dad Batman meme will certainly play with your imagination. As it turns out, comic book superheroes have all of the same concerns as regular parents, but something tells me their kids aren't as eager to put up a fight!

The hilariously accurate meme features Batman comic book drawings reinterpreted to reflect this story line, with clever thought bubbles like "Is that really all you're wearing," that are oh-so-familiar to every teenage daughter who will always be daddy's little girl -- even if their daddy is in charge of saving the world.

Implications - The significant cultural influence of comic book characters makes them the perfect target for reinterpretation from fans whose imaginations are stretched by these iconic stories. Memes are the newest form of Internet interpretation, and feature humorous perspectives on familiar cultural images and characters.
5.7
Score
Popularity
Activity
Freshness
Get Better and Faster