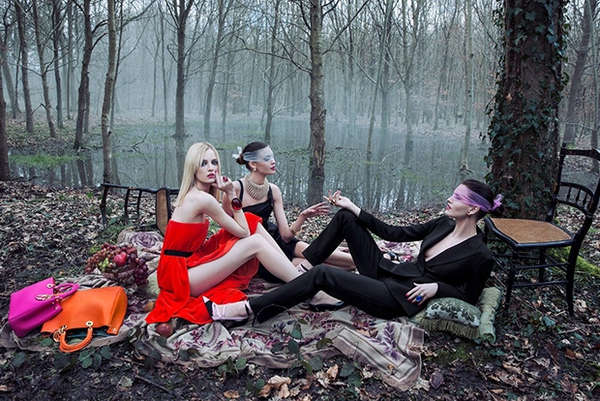 The Dior Secret Garden 2 - Versailles Campaign Looks Like a Painting

Meghan Young — May 9, 2013 — Fashion
References: dior & fashionising
Share on Facebook Share on Twitter Share on LinkedIn Share on Pinterest
The Dior Secret Garden 2 - Versailles ad campaign paints a pretty picture. That is largely due to the fact that it was greatly influenced by Édouard Manet's painting, Le déjeuner sur l’herbe. It has surprisingly been desensualised, though the sapphic theme is appreciated by both men and women. Going for more elegance, the ad campaign is a stylish masterpiece either way.

Shot by photography duo Inez van Lamsweerde and Vinoodh Matadin, the Dior Secret Garden 2 - Versailles ad campaign is a follow up to the fall and winter 2012 campaign of the same name. This time, however, it embraces a more whimsical aesthetic. Set for a full release in June, it will be accompanied by a video filmed in Versailles.
5.7
Score
Popularity
Activity
Freshness
Get Trend Hunter Dashboard