Stupidvertising
Next
Set of
Related
Ideas 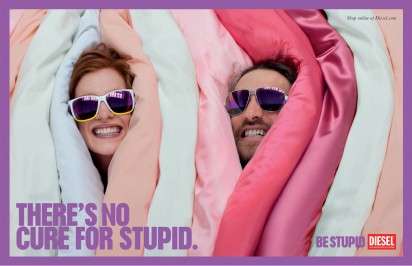 The Diesel Jeans Be Stupid Campaign is Both Silly and Stylish

Meghan Young — April 19, 2012 — Fashion
References: anomaly & ibelieveinadv
It's been awhile since a crop of Diesel Jeans Be Stupid print ads have surfaced. The latest campaign is as beautifully brainless as the previous ones. It encourages living life to the fullest without fear of looking dumb, while also promoting the newest denim designs this brand has to offer.

The Diesel Jeans Be Stupid ad campaign was conceived and executed by Anomaly, an ad agency based in London, United Kingdom. It was art directed by Coral Garvey with creative direction by Kevin Lyons and Ian Toombs. Photographed by Magnus Haukdal Jonsson and Kristin Vicari, the campaign is filled with silly shots that do not compromise its overall stylish nature. From butt munchers to human bicycles, the Diesel Jeans Be Stupid ad campaign has it all.
6.2
Score
Popularity
Activity
Freshness