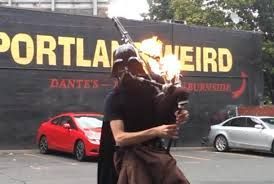 There's so much going on in this video that it's tough to peg anything down as being incredible so let's talk about it all. First of all, he's riding a unicycle while bag-piping -- both of those things are difficult by themselves but doing them together is downright impressive.

Next up, there is fire coming out of the various pipes as he plays ,which is Vegas level showmanship. Thirdly, he brought his own storm troopers to sit in the audience. All of this was done on live television while riding around Mr. Kimmel as well, so it's no fluke -- this man is talented.
0.3
Score
Popularity
Activity
Freshness
Attend Future Festival