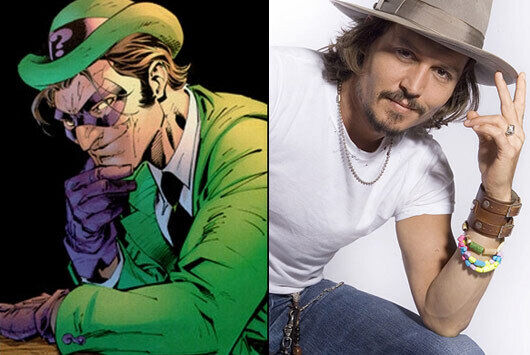 Johnny Depp as The Riddler?

Elsa Blaine — August 9, 2008 — Pop Culture
References: flylyf
After making $314 million in just 10 days, it is destined that there be a sequel to the Dark Night. Apparently, the radar is pointing to both Johnny Depp and Philip Semour Hoffman for a possible sequel.

According to Flylyf, sources are saying that, â€œproducers are convinced that the role of The Riddler is perfect for Depp.â€

The source also suggested, â€œwhat better Penguin is there than Philip Seymour Hoffman?â€ I agree that both would be perfect castings.

Jim Carey played the role of The Riddler in the 1995 Batman Forever, and Danny De Vito played The Penguin in Batman Returns in 1992.

As we heard previously on Trend Hunter, rumours have Angelina Jolie in the role of the Catwoman. A cast dreams are made of!

38 Batmannovations
Honouring the Caped Crusader, From Meltdowns to Bike Suits