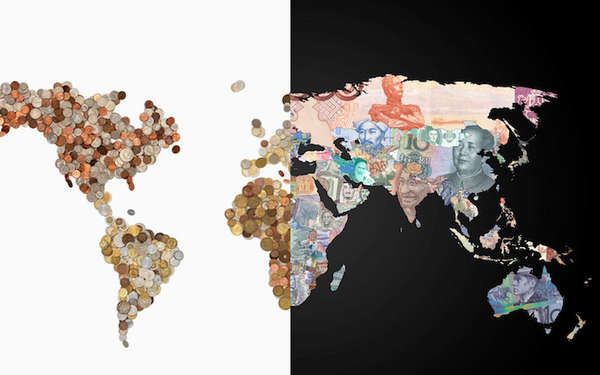 The Currencies Around the World Maps Look Rather Expensive

Meghan Young — September 27, 2012 — Unique
References: bedow.se & mymodernmet
Share on Facebook Share on Twitter Share on LinkedIn Share on Pinterest
The Currencies Around the World Maps are striking depictions of Earth's topography. Each one is made using the currency of the countries depicted. Nevertheless, while one centers around paper money, the other uses coins. Utterly unique and artistic, it shows just how similar these different cultures can be despite the belief that they are very different.

One of the Currencies Around the World Maps was created by Swedish design studio Bedow, run by creative director Perniclas Bedow. Using approximately 3,000 coins, the map was recognized as winner at the Kolla! Awards in September 2012. Redditor The310Investigator, on the other hand, spent 12 hours pasting together his colorful map through photo manipulations. He pieced the images together like one big jigsaw puzzle.
2.6
Score
Popularity
Activity
Freshness
View Innovation Webinars
play_circle_filled