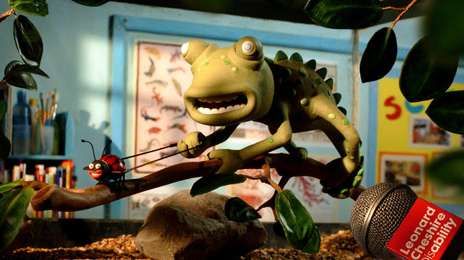 As a sequel to the much loved shorts from the 90’s, everybody’s favourite plasticine wizards, Aardman, have developed a set of new characters for the Leonard Cheshire Disability Charity’s ongoing ‘Creature Discomforts’ campaign.

The series challenges people to change the way they see disability and the characters are based on the unscripted voices of disabled people talking about the issues that affect their lives.

MCM Net produced four flash games for the viral end of the campaign, and Rubber Republic was assigned to handle seeding duties. Three of the four games have been released fortnightly since Oct. 17, with the final game set to launch on Friday, Nov. 7. The games are fun, simple to play, beautifully animated but also share the same serious message as the previous ads.

A noteworthy feature in the first game of the series, ‘Flyzz’ featuring Callum The Chameleon, was that it carried an 'audio only' option, making it one of the few flash games that are accessible to the blind.

The three released games and their descriptions are as follows:

Flyzz - Help to feed Callum the blind Chameleon, by catching those pesky flies and wasps with his acute lizard instincts and his super long tongue!

Peanut Pickup - Help Millie feed the giant, restless Elephant some nuts. Make sure you don’t don’t try and feed him the green ones, he hates them! Also be careful of the trunk, you may be mistaken for food and picked up!

Sweetshop Sweep - Tim the one-legged Tortoise is attempting to use his crutches and his eye for physics to launch himself as far into a sweet shop as tortoise-ly possible. His sugar-hungry kids are demanding sweets and Tim is prepared to go to any lengths to get them!

Visit the Creature Discomforts site to discover more information on the characters, to see the ads in their other formats and for lots of other treats and extras.

Oh and by the way, these games are a sure fire way to impress women. I showed my girlfriend and she loved it!