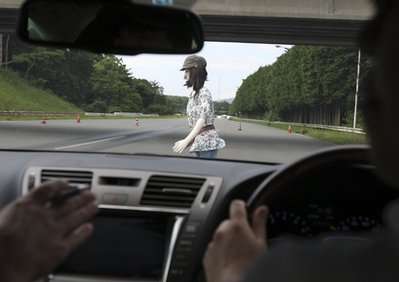 Omar Yusuf — July 24, 2011 — Autos
References: old.news.yahoo & engadget
Share on Facebook Share on Twitter Share on LinkedIn Share on Pinterest
Toyota Motor Corp. has built its fame by always bringing the future a little early and, in the hopes of doing just that, the company has revealed its newest crash-avoidance technology, which takes control of steering in the event of an imminent collision.

You may be thinking that you'd rather rely on your own quick reflexes during a life-or-death situation, but after reading about Toyota's cutting-edge software, you may want to reconsider. The crash-avoidance system employs several cameras in combination with a sensitive millimeter-wave radar to detect pedestrians, obstacles and other vehicles.

Thanks to improving technology, automotive accidents resulting in deaths or injuries have declined in Japan, although pedestrians are still at risk. Toyota's new system hopes to reduce the number of pedestrian accidents to zero -- a lofty goal, but one any driver is willing to support.
0.8
Score
Popularity
Activity
Freshness
View Innovation Webinars