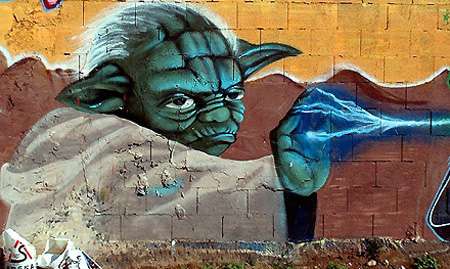 In any event, take a look at these wonderful movie-inspired graffiti projects. The murals include characters from Star Wars, Alien and the Transformers films. This stuff is really beautiful and very well done. There is great attention to detail, the colors are wonderful and whoever did these has got some serious mad skills!

Graffiti is often regarded by some as unsightly damage or unwanted vandalism. Graffiti has existed since ancient times, with examples going back to Ancient Greece and the Roman Empire. In modern times, spray paint and markers have become the most commonly used materials. In most countries, defacing property with graffiti without the property owner's consent is considered vandalism, which is punishable by law. Sometimes graffiti is employed to communicate social and political messages. To some, it is an art form worthy of display in galleries and exhibitions. The public generally frowns upon "tags" that deface bus stops, trains, buildings, playgrounds and other public property.