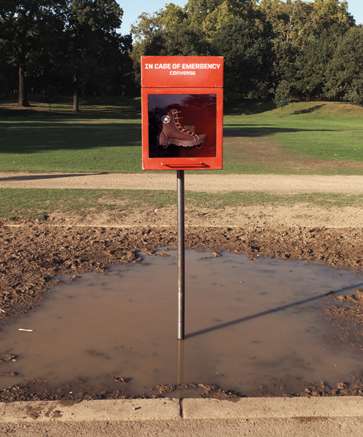 Katherinev123 — October 19, 2011 — Marketing
References: facebook & popsop
Share on Facebook Share on Twitter Share on LinkedIn Share on Pinterest
For United Kingdom residents who happen to find themselves on the side of the road with no shoes, Converse has you covered. The innovative shoe brand has launched the Converse 'In Case of Emergency' campaign, in which it has put red shoe boxes in secret locations across the UK -- the boxes contain winter boots that can be taken out and worn if the situation calls for it (or if you just want a free pair of shoes).

What's more, if you take a photo of the boxes you find and post them to the Converse Facebook page, you are entered to win a ticket to the 'adventure' event at the London's 100 Club, according to Popsop. However, because the shoes are placed in locations where good shoes are needed, the shoes are likely to be snatched up within an hour.

If you care less about the event and just want a pair of shoes, the Converse 'In Case of Emergency' campaign still gives you a chance to win a pair of Converse boots. Just go to the empty box and tweet the emergency you find written in it using the #converseboots hashtag.
3.9
Score
Popularity
Activity
Freshness
Get Better and Faster