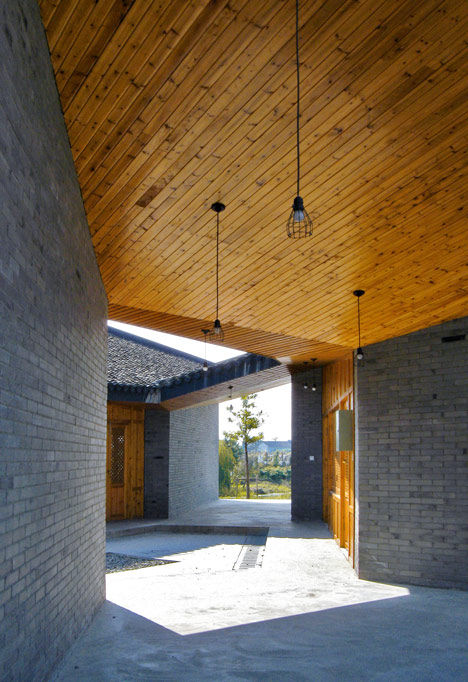 Tiffany — January 22, 2014 — Art & Design
References: dezeen
Share on Facebook Share on Twitter Share on LinkedIn Share on Pinterest
In a project for the building and designing of a multipurpose recreational center for the inhabitants of Malu in Jiading district of Shanghai, China, local architecture studio Scenic Architecture Office has designed a structure named the Community Pavilion. Located in the suburbs of Shanghai, the structure is a six-sided hexagon, with a courtyard in the middle, while different recreational rooms surround it.

The recreational facility is located on a plot of land that sits at the intersection of two rivers. Both sides of the building combine to form a teahouse and a recreational room. The rest of the sides of the hexagonal structure provide a dual view of the surrounding landscape, where a concrete bridge is located that interlinks the community center to the surrounding farmland.

The walls are all laid in cement-colored bricks, while grid-like frames act as wooden shades to separate the rooms and the outdoor spaces. “We played down the differences between the attributes of the six indoor and outdoor spaces and tried not to dictate where is the interior, where is the outdoors, or how each space should function,” says the architects on the overall structure of the center.
1.2
Score
Popularity
Activity
Freshness
Get Trend Hunter Dashboard