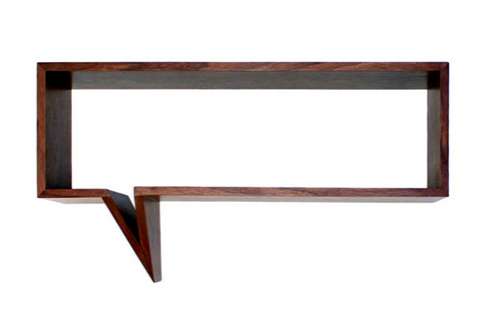 The Comic Shelf Brings Graphic Novels into the Real World

Jason Soy — February 28, 2012 — Art & Design
References: behance.net & sweet-station
The Comic Shelf is an absolute necessity for anyone with a passion for graphic novels. After all, the idiosyncratic furniture piece doesn’t only look like a dialogue bubble straight out of comic book, it also lets users organize their reading materials in something super sleek. And if you stand underneath the angled portion of the shelf, it’s as though you’re communicating whatever it is you’ve chosen to place on the storage space.

The Comic Shelf was designed by Oscar Nunez for Fusca Design. Rather than using rounded dialog boxes, Nunez has opted for a more angular look, which makes sense in order to keep stored objects leveled. Still, it won’t be long until variations of the Comic Shelf start popping up with bizarre designs reminiscent of the pages of graphic novels.
3.9
Score
Popularity
Activity
Freshness