Surreal Self Portraits
Next
Set of
Related
Ideas 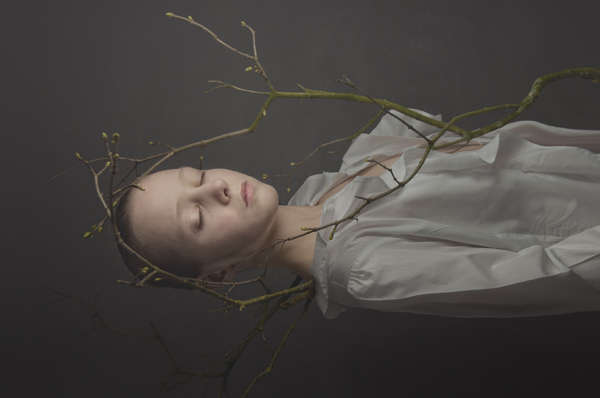 Meghan Young — January 25, 2013 — Fashion
References: delonefotografie.nl & behance.net
Share on Facebook Share on Twitter Share on LinkedIn Share on Pinterest
The Comfortably Numb photo series plays with perception in a very subtle and obvious way. The portraits of each subject have been captured sideways (or simply rotated to present sideways) in order to engage people in a different manner. As though wanting to tweak the aesthetic of classic portraitures even further, the Comfortably Numb series also features strange twig adornments. Thus, the illusion of a dark forest is conveyed

Shot by Ruadh DeLone, a photographer based in Rheden, the Netherlands, the Comfortably Numb photo series forces viewers to focus on different points of the images. If they were positioned upright, most likely the gaze would have been immediately directed to the eyes. In this case, however, people take it in haphazardly as they attempt to right the images in their head.
2.8
Score
Popularity
Activity
Freshness
View Innovation Webinars