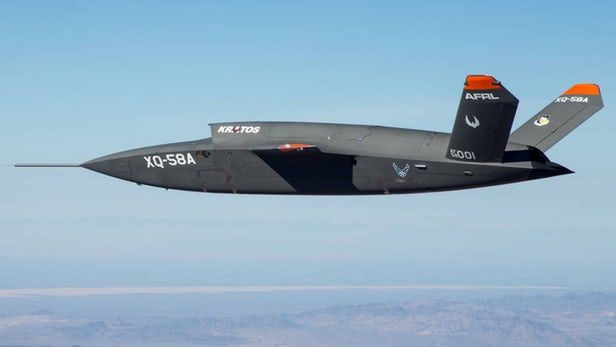 Rahul Kalvapalle — March 11, 2019 — Tech
References: wpafb.af.mil & ir.kratosdefense
Share on Facebook Share on Twitter Share on LinkedIn Share on Pinterest
With warfare becoming an increasingly high-tech affair, drones have taken on a higher degree of importance than ever before, with the all-new Kratos XQ-58A set to redefine standards thanks to its ability to function as an autonomous combat drone that can carry out missions while keeping human controllers away from potential harm.

Developed as part of a collaboration between Kratos Unmanned Aerial Systems and the U.S. Air Force, this particular combat drone is capable of hitting a top speed in excess of 1,000 km/h and can fly at altitudes of over 13,000 meters. It is capable of deploying a wide variety of weapons, allowing for versatile combat options.

With its combination of high speed, a high range and array of weaponizing options, the Kratos XQ-58A aims to offer a significant tactical advantage out on the modern battlefield.
5.9
Score
Popularity
Activity
Freshness
Jeremy Gutsche Keynote Speaker