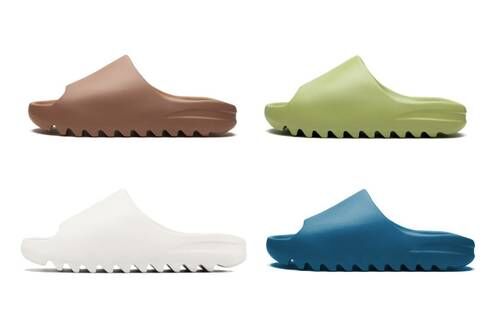 Amy Duong — February 3, 2021 — Fashion
References: hypebeast
Share on Facebook Share on Twitter Share on LinkedIn Share on Pinterest
Colorful YEEZY SLIDES make its way online as PY_RATES showcases a look at the new sandal options. It is set to drop in the coming weeks, offering four new colorway options of the signature silhouette. The tones include Core, Resin, Pure, and Enfora, which are blue, green, white, and brown.

The brand has previously been recognized to explore predominantly neutral hues, with some interest in bright and bold tonal palettes. The selection is led by the bright green and blue colorway options for fans to make a bold statement. The earthy hue options include the white and brown for those who prefer to rock a more subtle statement, which were seen in the original debut of the minimal sandal model.

Expressive Recycled Activewear
The FUTUREPLAYGROUND Line is Made from Recycled Plastic