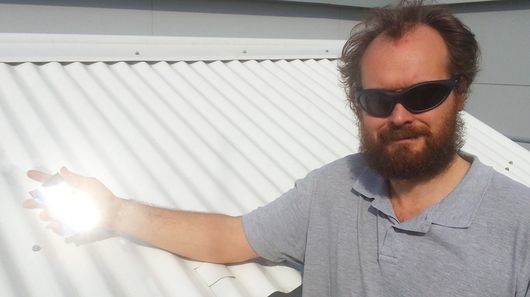 Rahul Kalvapalle — June 1, 2015 — Art & Design
References: newsroom.uts.edu.au & gizmag
Share on Facebook Share on Twitter Share on LinkedIn Share on Pinterest
A team of scientists based in Sydney, Australia have developed a special coated polymer material that is capable of keeping a rooftop cooler than the air that surrounds it. This not only helps keep residents cool and comfortable, but also saves them money by lightening their energy bills, thereby also being good for the environment.

The researchers, based in the University of Technology Sydney, claim that their coated polymer stack can tackle the rise in temperature that roofs experience, which can often be measured at up to nine or twelve degrees Celsius. This is part of what is commonly referred to as the 'heat island effect'.

This new material could help reduce the reliance on air conditioning during the hot Australian summer, and could one day prove to be a marvelous solution for hot developing countries lacking in electricity infrastructure.