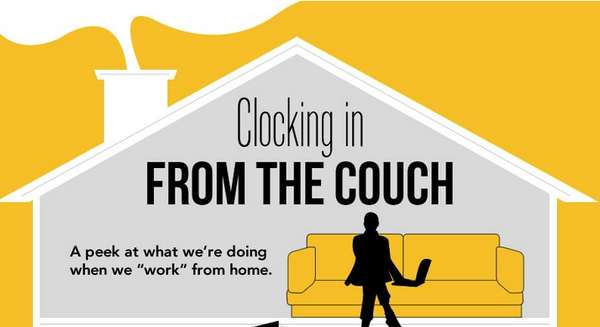 The 'Clocking in from the Couch' Infographic Explains Work Lifestyles

Jennifer Gosnell — August 15, 2012 — Lifestyle
References: onlinedegrees & mashable
Share on Facebook Share on Twitter Share on LinkedIn Share on Pinterest
The 'Clocking in from the Couch' infographic examines the ways in which working from home is better or worse than working in an office environment. Though results in the survey state that the office still wins in terms of being the people's choice of where they are most productive, the "equally productive at home/office" option comes in a close second.

Working full time from home has grown in recent years, but still remains an option for less than 5 percent of the population. However, over 33 percent of companies do allow employees to regularly work at home.

Employees who work from home generally hold a bachelor's degree or higher, with few holding less than a high school diploma.

Working at home has some upsides, like less office distractions and a more comfortable environment, but it also has some downsides, like watching TV at the same time as working, which can lead to less productivity.
6.1
Score
Popularity
Activity
Freshness
Attend Future Festival