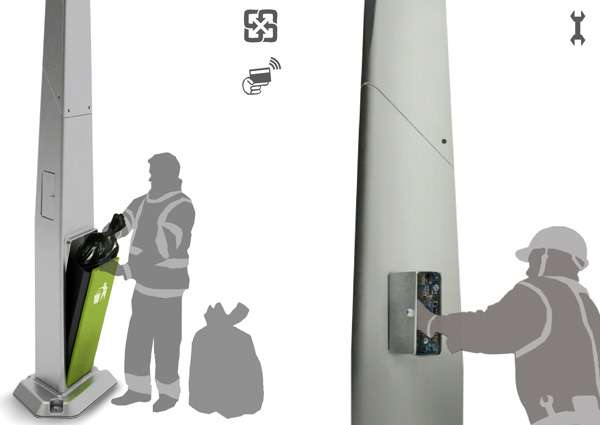 Amelia Roblin — July 11, 2011 — Eco
References: idsa.org & yankodesign
Share on Facebook Share on Twitter Share on LinkedIn Share on Pinterest
It's difficult to keep a bustling urban environment tidy, and the number and careful placement of garbage bins can have a lot to do with its success. The City Context Streetlight concept offers a clever solution to streamlining metropolitan sidewalks, suggesting the hybrid design of streetlamps and trash cans to be installed at regular intervals.

Already starting out as eco-friendly project, the urban illuminators are powered by solar panels at the top of pole's split shaft. Each lamppost will contain a single compactor at its base, encouraging the separation of general waste and recyclables into different receptacles. There will hence be four different models of the City Context Streetlight, taking care of plastic, paper, metal and other scraps. To avoid the resurfacing of litter, the garbage can portion of the 2011 IDEA Award winner can only be accessed by trash collectors with special keycards.
2.1
Score
Popularity
Activity
Freshness
Jeremy Gutsche Keynote Speaker