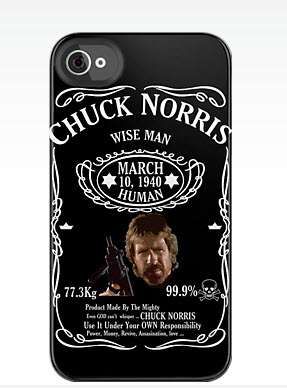 For those who don't know this iconic figure, Norris appeared alongside Bruce Lee in the film Way of the Dragon, and he starred in the popular television series Walker, Texas Ranger. In 2005, he inspired the humor website Chuck Norris Facts, which pays homage to him as a super human that can defeat anything in his way. For example: Chuck Norris can cut diamonds using his thumb.

Chuck has inspired countless products, including T-shirts, talking bobble heads and plush toys. He can now add smartphone case to his list of awesome inspirations. These Chuck Norris smartphone cases and capsules feature Chuck in a series of manly poses. You can choose from him as the face of Jack Daniels whiskey, as a Simpsons cartoon character, telling you to obey or as the classic Walker, Texas Ranger.