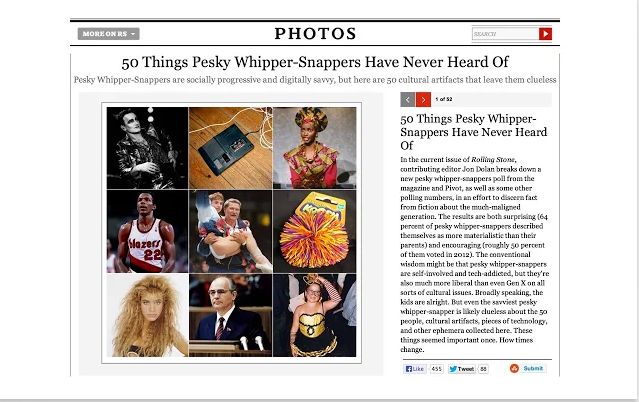 This Chrome Extension Erases the Word Millennial From Your Vocab

Unless you've been living under a rock, you've probably encountered the term 'millennial' before. It refers to the group of people born in the late '80s and into the '90s. In other words, a millennial is a person who belongs to Generation Y. Pretty simple, right? Wrong. Since its inception, the word 'millennial' has become loaded with a lot of not-so-positive characteristics that older generations are quick to attribute to Gen Y. Namely, that all millennials are lazy, unmotivated, technology-obsessed kids armed with an idealistic vision and sense of entitlement, but no concept of hard work.

Weeks' hilarious Chrome extension only goes to show how often the word 'millenial' is thrown around on the Internet, usually in self-indulgent think pieces and op-eds that offer little-to-no insight, but a lot of criticism.
3.9
Score
Popularity
Activity
Freshness
Get Better and Faster