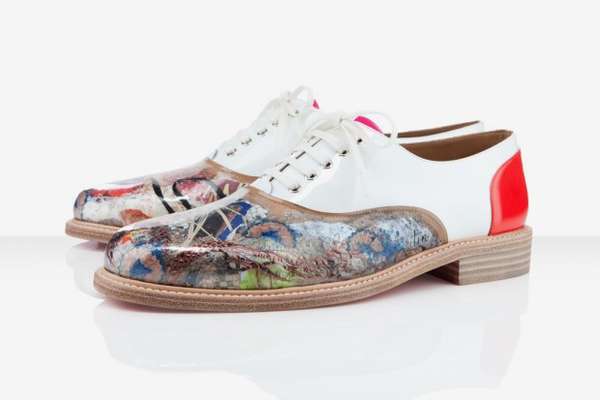 Meghan Young — January 23, 2012 — Eco
References: us.christianlouboutin & hypebeast
Share on Facebook Share on Twitter Share on LinkedIn Share on Pinterest
At first, the Christian Louboutin Havana Trash Men's Flat looks as though it were inspired by an abstract, impressionist painting. The colors, strokes and patterns are so artistically rendered, it is only natural that would be the case. It is also natural for a shoe designer of Louboutin's renown to create such a masterpiece. Nevertheless, this shoe is inspired by the eco movement.

The Christian Louboutin Havana Trash Men's Flat is made out of repurposed garbage such as shoe boxes, envelopes and stamps found in the designer's own factory. According to Louboutin's website, "Female Loubi Lovers have fawned over numerous trash styles that have made appearances in collections for decades past. Gentlemen your time has come." Because of the materials used, each pair of Christian Louboutin Havana Trash Men's Flat are exclusively unique.
4.7
Score
Popularity
Activity
Freshness
Attend Future Festival Virtual