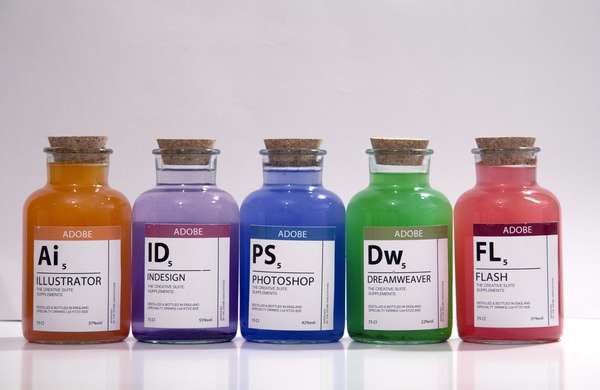 Romina S. Cortellucci — June 14, 2012 — Tech
References: behance.net & themag.it
Share on Facebook Share on Twitter Share on LinkedIn Share on Pinterest
Christian Baranowicz 'Adobe Fuel' is a magic elixir for the digital design era. This fueled-up idea was created by UK-based graphic designer and student Christian Baranowicz. The project was spawned by a University brief he received that asked students to express their own thoughts on re-appropriation. By taking something digitally based and bringing it into a new realm, Baranowicz succeeds in his use of the information.

This re-imagination of Adobe's digital design suite turns into something that can serve as creative fuel in the real world. Learning Illustrator, Indesign, Photoshop, Dreamweaver and Flash will no longer take countless hours and years, but instead will be as easy as enjoying a refreshing drink.

On his website, Baranowicz asks an incredibly thoughtful question, wondering, "What if the possibility to learn/renew knowledge could be consumed rather than processed?" By expanding the idea of knowledge, he allows the audience to see the future capabilities of the world.

Perhaps it is my own ineptitude with technology, but I would love to see these drink becoming a reality.
3.9
Score
Popularity
Activity
Freshness
Attend Future Festival Virtual