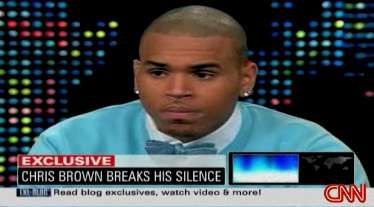 Brian G Randles — September 3, 2009 — Pop Culture
References: mashable
Share on Facebook Share on Twitter Share on LinkedIn Share on Pinterest
Chris Brown broke his silence last night in an interview with CNN’s Larry King. He addressed the issues which have plagued his career this past year. Unfortunately for Chris Brown, the attempt to save his image hit a bit of roadblock… his image.

The “Forever” singer ignited an Internet frenzy with one simple wardrobe choice… his baby blue bow tie. The hashtag #chrisbrownsbowtie is king of the Twitter Trending Topics and has provided some fantastic tweets. Examples include…

#chrisbrownbowtie got a vh1 reality show called tie the knot

#chrisbrownsbowtie can beat up Chuck Norris with a single glance..

#itmightbeover when we love #chrisbrownsbowtie more than we love him