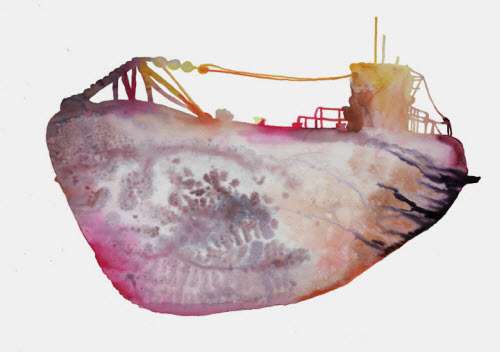 Jason Soy — March 6, 2012 — Art & Design
References: chingchingcheng & brwnpaperbag
Share on Facebook Share on Twitter Share on LinkedIn Share on Pinterest
It may take a few moments for you to discern the subjects being depicted in these Ching Ching Cheng illustrations, but this forced engagement with her work definitely enhances the viewer’s overall enjoyment of her pieces. Rather than rendering the details of boats, tanks, engines and people, Cheng chooses to express those things using only silhouettes, replacing identifiable features with abstract watercolor patterns. In doing so, viewers are lulled into thinking of the idea of a particular subject rather than its physical appearance.

Ching Ching Cheng explains that she often illustrates images to challenge her audience to think on a psychological level. She wants her viewers to reflect on what objects mean to them personally. For example, Cheng’s depiction of a tank carefully masks a hidden mushroom cloud, denoting her associations of war machines with mass destruction.
2.9
Score
Popularity
Activity
Freshness
Get Trend Hunter Dashboard