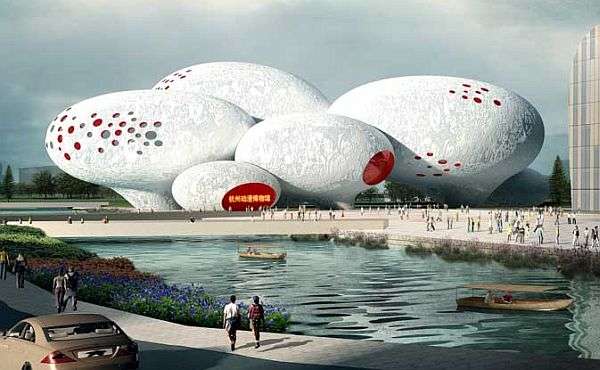 The China Comic and Animation Museum is a Bubbly Building

Amelia Roblin — May 10, 2011 — Eco
References: mvrdv.nl & ecofriend
Share on Facebook Share on Twitter Share on LinkedIn Share on Pinterest
Though it's not a rule, many cartoon characters take on simple and plump appearances, which makes the China Comic and Animation Museum a great home for the caricature community. Architectural firm MVRDV has won the competition to design the Hangzhou complex, and aims to create a bubbly environment to encourage the enjoyment of all.

The eccentric structure of the project incorporates eight balloon-like masses. Each has a whitewashed exterior, a compressed form, and perforations that promote passive ventilation. The spaces within the entertainment center exist within separate blimp-like buildings, but they open up to one another on the inside. The China Comic and Animation Museum will incorporate exhibition spaces, a theater, a food court and a pavilion dedicated entirely to cutting-edge interactive technologies.
3.5
Score
Popularity
Activity
Freshness
Jeremy Gutsche Keynote Speaker