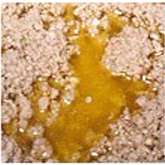 Rose A. Valenta — March 13, 2007 — Eco
References: philly
Share on Facebook Share on Twitter Share on LinkedIn Share on Pinterest
Renegade chicken fat clogged a traffic artery on Interstate 20 in Monroe, La. on Monday, March 12, 2007, leaving a noxious trail of slippery goo. Knowing that the part that goes over the fence last could never leave a trail that big, officials went looking for a human perpetrator. The culprit, an industrial cleaning truck, was meandering along the Ouachita River when it was pulled over for suspicion of carrying Hazmat.

No one knew what to do about it, Emeril Lagasse was not answering calls, and no tailgaters were in sight, so city crews spread sand on the highway to suck up the fat. Then, to make matters worse, it started to rain. Cars were sliding all over the eastbound lanes and people were dropping like flies from the stench.

They finally cleaned up the mess, but officials from the Department of Transportation and Development were unclear as to where the fat originated.