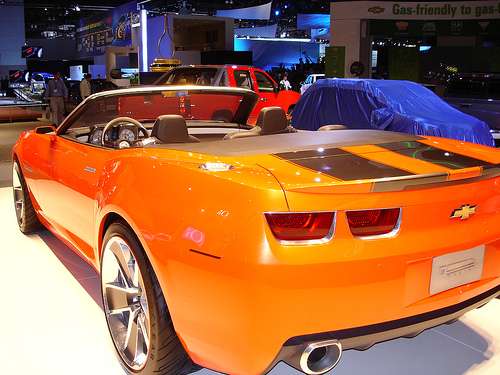 Bianca — July 23, 2008 — Autos
References: trendhunter
Share on Facebook Share on Twitter Share on LinkedIn Share on Pinterest
The 2010 Chevy Camaro is on its way, and to celebrate, we're tracking back its history in pop culture. Since the first Chevrolet Camaro was produced, it has been not only popular on streets around the world, but has kept a consistently strong showing in the media.

The Chevy Camaro has played starring roles in TV shows and movies, like Bumblebee in Transformers in 2007; however, they date back quite far, including the 1967 Camaro in Better Off Dead and the 1968 Camaro in Aloha Bobby & Rose.

The pony car has popped up in songs and lyrics like Camaro Man by Blue Meanies, Yellow Camaro by Weezer, Bitchin' Camaro by Dead Milkmen, Camaro by Kings of Leon, The List by Metric, Go Lil' Camaro by The Ramones and Wishlist by Pearl Jam.

The Camaro has been in games like Forza Motorsport, Gran Turismo, L.A Rush, Midnight Club 3: DUB Edition Remix, Need for Speed series, and Sega GT 2002. In addition, it has been featured in countless ad campaigns, posters and magazine covers.

This gallery shows the evolution of the Chevy Camaro over the years.

The new 2010 Chevy Camaro is set to roll off the assembly line in January 2009.
4.6
Score
Popularity
Activity
Freshness
Get the 2021 Trend Report FREE