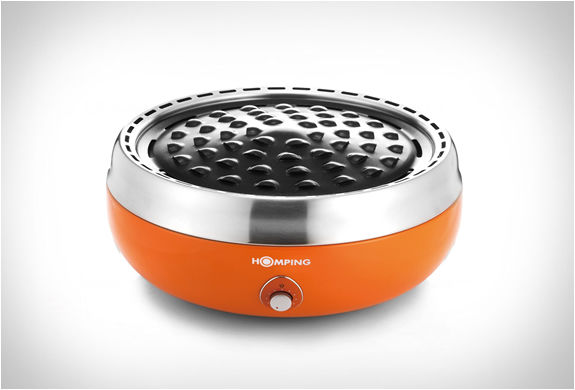 David Ingram — August 24, 2015 — Art & Design
References: hompingusa & blessthisstuff
Anyone who loves the flavor from using charcoal grills, but hates all the smelly black smoke that comes along with it can now breathe easy knowing about this nearly smokeless portable BBQ.

The difference between the 'Homping Grill' and other charcoal grills is that it's designed to give off less smoke, use less charcoal and is much faster and easier to light. A built-in fan and temperature control switch helps manage airflow, allowing the grill to warm up to over 400 degrees Fahrenheit in only two to three minutes.

Besides being nearly smokeless, the 'Homping Grill' weighs in at only eight and a half pounds, has a built-in system for diverting cooking juices away from the flames and comes with three different non-stick grill plates that can be changed depending on the style of cooking.
5.4
Score
Popularity
Activity
Freshness