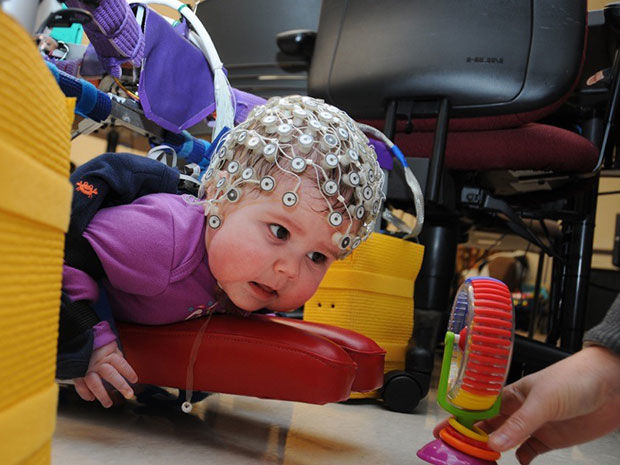 This Machine Can Lessen Infants' Risk of Cerebral Palsy

Joey Haar — July 28, 2016 — Tech
References: spectrum.ieee.org & digitaltrends
Share on Facebook Share on Twitter Share on LinkedIn Share on Pinterest
Researchers from the University of Oklahoma's Health Science Center have developed a machine, called the 'Self-Initiated Prone Progression Crawler' (SIPPC), that combines a toy skateboard, a mind-reading robot and an AI algorithm to help lessen the effects of cerebral palsy for at-risk infants. Though cerebral palsy usually isn't diagnosed in children until at least their first birthday, experts agree that children with the risk of developing the disorder should receive therapy as early as possible.

The SIPPC machine is essentially a crawling aid, which is why it helps limit the effects of cerebral palsy. Typically, the disorder makes crawling so difficult that infants simply stop trying, ultimately preventing the brain from developing important locomotion and motor skills. The SIPPC uses electrodes that read an infant's brain signals and interpret where the child wants to go, then provides some aid to help the child get there. This lets the brain continue to develop important regions, ultimately reducing the impact of cerebral palsy later in life.
4.3
Score
Popularity
Activity
Freshness
Get Trend Hunter Dashboard