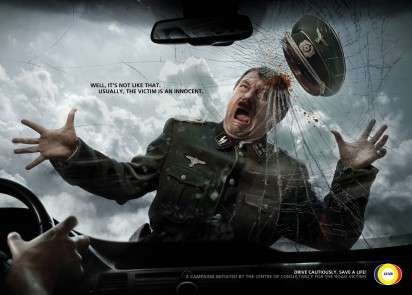 Meghan Young — November 7, 2012 — Autos
References: publicis.ro & ibelieveinadv
The images in the Centre of Consultancy for The Road Victims ad campaign are shocking. As though rewriting history, Adolph Hitler, Joseph Stalin and Saddam Hussein, three of the worst war criminals of all time, have been killed as the result of reckless driving. Although the person behind the wheel would probably be celebrated in these cases, the tag line bursts his or her bubble, "Well, it's not like that. Usually, the victim is an innocent."

The Centre of Consultancy for The Road Victims ad campaign was created by Romania-based ad agency Publicis Bucharest. Art directed by Vali Petridean and creative directed by Razvan Capanescu, the images were expertly put together and retouched by Upstairs Studio.
6.8
Score
Popularity
Activity
Freshness