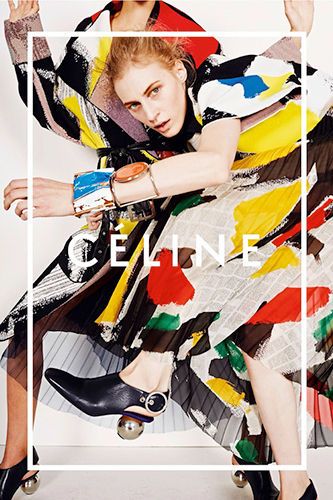 The Celine Spring 2014 Campaign Could Be Hung in a Gallery

Meghan Young — January 16, 2014 — Fashion
References: celine & refinery29
Share on Facebook Share on Twitter Share on LinkedIn Share on Pinterest
Like some sort of impressionist painting, the Celine Spring 2014 campaign is full of bright colors that could easily be interpreted as bold brush strokes. Of course, they are simply the prints and patterns on the fashion designs themselves, but they have been captured in such a way that they are given this artistic effect.

Full of movement, the Celine Spring 2014 campaign was lensed by German fashion photographer Juergen Teller, who happens to dabble in fine art photography as well. Starring models Daria Werbowy and Julia Nobis, the photoshoot was captured in studio against a white backdrop, which allows the vibrancy of the colors stand out even more. As Refinery 29 puts it, the images are a "striking sartorial twist on oil-painting class that we can't take our eyes off of."
5.6
Score
Popularity
Activity
Freshness
Attend Future Festival