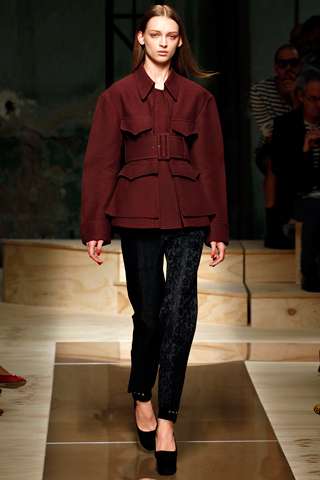 Souzan Michael — October 5, 2011 — Art & Design
References: fashionetc & style
Share on Facebook Share on Twitter Share on LinkedIn Share on Pinterest
There is a reason that fashion journalists have coined the saying, "Clean and lean at Celine," but for the first time since Phoebe Philo began her gig as the brand's (incredibly critically acclaimed) creative director, it was not applicable at the Celine Spring 2012 show.

Philo is known for creating sharp silhouettes. In fact, the designer is so influential that Kanye West references her in a song and many credit her with single-handedly bringing back minimalism (something I will be eternally grateful to Philo for). However, the Celine Spring 2012 collection was not clean and lean. It was full of ruffles and jewel tones and pleats. And this change was a surprisingly welcome departure from Celine's signature pieces.

With rumors of Phoebe Philo replacing Marc Jacobs at Louis Vuitton when (okay, if) he leaves for Dior, this collection might just be Philo's first dip into the world of patterns and textures that Louis Vuitton is famous for. After all, there's no harm in testing the waters.
2.9
Score
Popularity
Activity
Freshness
View Innovation Webinars