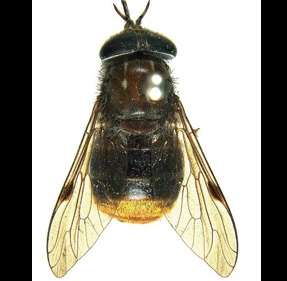 The 'Bootylicious' Horse Fly in Australia is Named After Beyonce

Jordy E — January 18, 2012 — Pop Culture
References: washingtonpost & gizmodo.au
The 'Bootylicious' Horse Fly has been named after pop icon Beyonce. According to researcher Bryan Lessard, the golden bottom that the horse fly so distinctively sports was synonymous with the "bootylicious" nature of Madame Knowles. Moreover, the species was captured for examination in 1981, the same year in which Beyonce was born.

Although the Washington Post confirms that Beyonce has not commented on the name 'Scaptia (Plinthina) beyonceae,' the official title of the horse fly, Lessard hopes that he will draw some much-needed attention to his field of study by providing the insect with celebrity status.

What's most shocking about the 'Bootylicious' Horse Fly is that this is not the first time that an insect has been named after a celebrity. In 2008, an odd looking beetle was named after rock icon Roy Orbison and his wife Barbara, technically termed the 'Orectochilus orbisonorum' beetle. That same year, a trapdoor spider was named after Canadian legend Neil Young, the favorite artist of East Carolina University biologist Jason Bond.

This trend in celebrity insect naming suggests a connection between the world of science and the world of music: two seemingly independent spheres.
1.3
Score
Popularity
Activity
Freshness