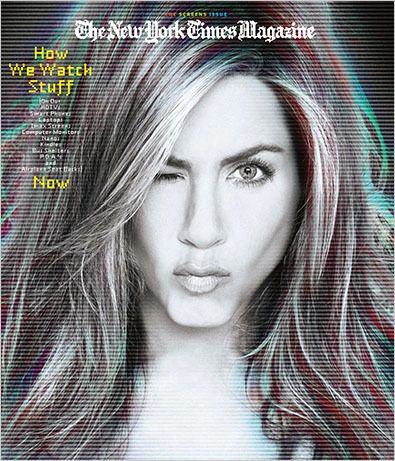 Aniston, who opened up for the first time in Vogue about her breakup with Brad Pitt--and who also took the opportunity to hate a little bit on Angelina Jolie--posed for the Times in an art gallery set design where she's the only spectator watching her own photos. The wacky and facially expressive dark gray and opaque white pictures speak to the excellent workmanship of the set designer.

Aniston did not talk about Pitt or Jolie on this interview. Instead she spoke about other issues which included her role in the popular sitcom Friends.

These are some excerpts from the interview:

Q: If "Friends" comes on when you're home, will you watch?

A: I have. There are times I don't even remember that particular show. This is horrible to say, but there are times when I laugh my rear end off. And I get in debates with people who are over and say, "'Friends' is not my thing."

Q:  When did you first appear on a screen?

A: My dad became a soap opera actor, and I was an extra in a skating rink scene on the soap. I didn't audition. It was nepotism all the way.

Q: Did you dream of being in big-screen movies rather than on television?

A: No. Never. As I grew up, there was "Mary Tyler Moore" and "Rhoda." TV seemed cool.
3.3
Score
Popularity
Activity
Freshness
Get Better and Faster