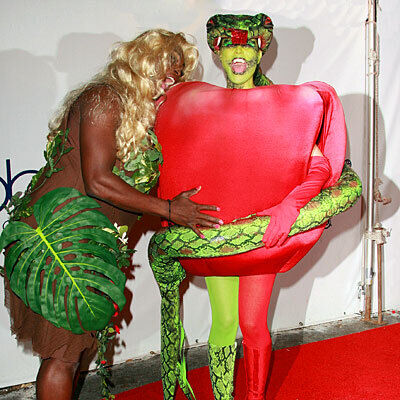 What The Stars Wear for Halloween

"For the 7th Annual Heidi Klum Halloween bash, held at Privilege in L.A., Seal dressed as Eve (of Adam and Eve), while Klum was the serpent and the apple from the Garden of Eden," InStyle said.

Klum's VIP guest list included a long list of A list celebrities, models, actors, and the rest of international 'it' crowd. The German supermodel hosts the party every year, asking all guests to dress up. Klum gets very creative each year, always in very elaborate costumes. Her fascination with Halloween comes from not having grown up with the festivities; the spooky night isn't recognized in Germany, so she says the parties help her make up for the years she missed out as a child.

Check out the photos from Klum's party and other celebrity Halloween sightings for inspiration:

1. Klum and Seal at this year's party
2. Anne Hathaway as Cleopatra at Klum's 2004 party
3. Christina Aguilera and Jordan Bratman at the Ghoulin Rouge party at Marquee in NYC in 2006
4. Gwyneth Paltrow and Apple in 2006; their disguises helped them blend in with other families and dodge paparazzi
5. Hilary Duff as a gypsy and sister Haylie as an '80s aerobics instructor at Airparty
6.8
Score
Popularity
Activity
Freshness
Access Advisory Services