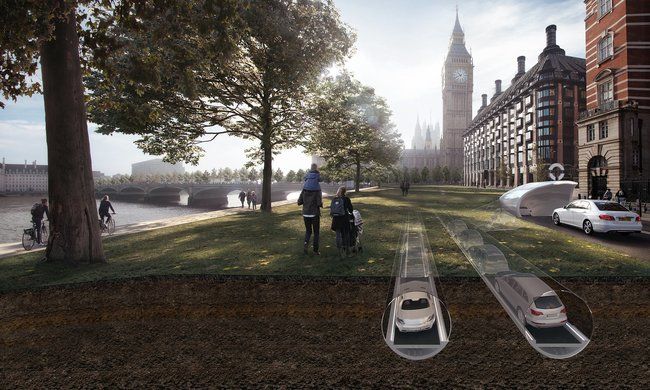 The CarTube Concept is a Public Transit Infrastructure Idea

Joey Haar — December 9, 2016 — Autos
References: plparchitecture & archinect
Share on Facebook Share on Twitter Share on LinkedIn Share on Pinterest
PLP Architecture's CarTube concept is a reversal of old-fashioned futurist imaginings. Decades ago, one of the staples of an imagined future was the flying car. The logic behind such a vehicle was practical, if also grandiose: cars that can fly will relieve traffic on the ground, making cities less congested. While flying cars haven't yet panned out, the CarTube concept uses the same logic.

PLP Architecture's idea is to build a series of underground tubes with automated, moving tracks and numerous entry and exit points. The system could run under roads, freeing up space and clearing congestion.

The CarTube concept is designed specifically for electric vehicles. This is because electric vehicles have virtually no harmful emissions, whereas gas-powered cars' exhausts would get trapped underground and could lead to poor air quality or even suffocation.
5.9
Score
Popularity
Activity
Freshness
Get the 2021 Trend Report FREE