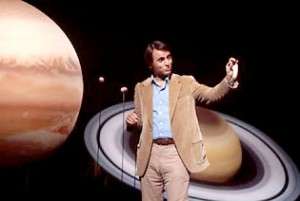 Omar Yusuf — August 7, 2011 — Pop Culture
References: deadline & gizmodo
Share on Facebook Share on Twitter Share on LinkedIn Share on Pinterest
As a lifelong fan of Carl Sagan's Cosmos, a 13-part documentary series explaining our place in the universe, I have to temper my excitement of the upcoming reboot with a degree of caution. Why? Because Family Guy creator Seth MacFarlane is at the helm of the project.

After three months of original airtime, Carl Sagan's Cosmos was already a classic and potentially the most accessible scientific series since Bill Nye the Science Guy. From ontology to the origins of life, the Cornell professor magically simplified some of astrophysics' most complex subjects. And now, out of left field, the Fox Entertainment Group ordered a modern remake of the series, to be hosted by noted physicist Neil DeGrasse Tyson and produced by Seth MacFarlane, the comic genius behind Family Guy.

Although it makes sense to reboot a show that hinges on cutting-edge discoveries, the inclusion of a comedic angle is somewhat troubling. We'll have to wait until mid-2012 to see how this unlikely cocktail of talent turns out.
0.4
Score
Popularity
Activity
Freshness
Attend Future Festival