Ring Around the Cardigan 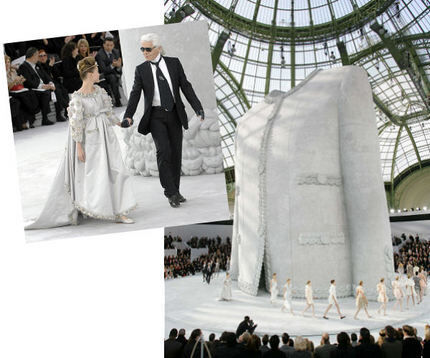 Taking center stage at the show was a gigantic cardigan, one of the key fashion pieces iconic of the Chanel design house, complete with intertwined C logo. Standing 75 feet, the white jacket rotated slowly around the Grand Palais. Lagerfeld chose the cardigan to celebrate his new take on the classic piece.

For the show's finale, Lagerfeld took the hand of model Devon Aoki as he made his rounds waving to adoring fans which included supermodel Claudia Schiffer and film-maker Sofia Coppola.