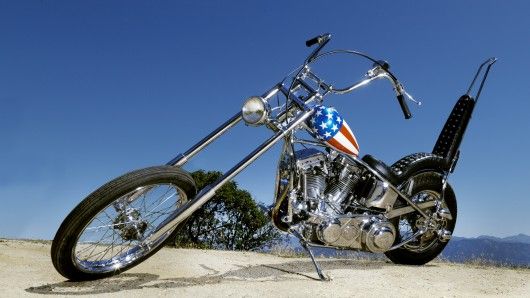 The Captain America Chopper is Hitting the Auction Block

Rahul Kalvapalle — October 16, 2014 — Autos
References: profilesinhistory & gizmag
The Captain America chopper, an iconic Stars-and-Stripes-adorned motorcycle ridden by Peter Fonda in the classic movie Easy Rider, is hitting the auction block. It is expected to fetch over $1 million, which would make it the world's most valuable motorcycle. This is perhaps unsurprising given that the movie the motorbike appeared in didn't just star Peter Fonda but also Dennis Hopper and a very young Jack Nicholson.

Moreover, the bike was used during the movie's iconic climax sequence. After filming, the motorcycle's remains were passed on by Fonda to fellow actor Dan Haggerty. The motorbike even comes with a letter of authenticity provided by Fonda himself.

The bike is expected to hit the auction block on October 17. It is one of four original bikes in the iconic series.