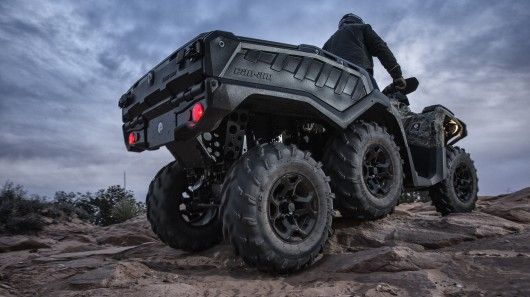 Rahul Kalvapalle — May 5, 2014 — Autos
References: can-am.brpscandinavia
The new Can-Am Outlander 6x6 1000 XT is an incredibly powerful six-wheel-drive ATV which can be used as a adrenaline-pumping recreational vehicle or a no-nonsense workhorse.

This rugged beast of an ATV sends engine output from its 82-horsepower Rotax V-Twin 1000 engine to all six wheels, allowing it force itself up slippery dirt hills, plough through sticky mud fields and barge over rugged rocky terrain and much more. This muscly ATV is able to haul 1,650 pounds (750 kg) of tow load.

The driver of the Can-Am Outlander 6x6 can track its performance via a multi-functional digital gauge that includes a speedometer, tachometer, odometer, fuel gauge and other tools. The vehicle has a blindingly powerful 230-watt headlight system and a 625-watt 'magneto' generator that can be used to power up accessories.

Insectified ATVs
The Electrobite Vehicle Will Make You Bug Out