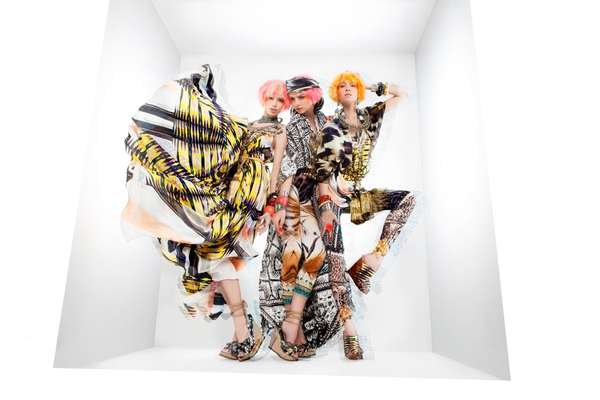 Camilla Franks SS 2011 Campaign is a Blur of Brights

Katherinev123 — September 1, 2011 — Marketing
References: camilla.au & fashionising
Share on Facebook Share on Twitter Share on LinkedIn Share on Pinterest
Filled with the designer’s signature bold and brazen designs, the Camilla Franks SS 2011 collection is not for the faint of heart. Since launching her line in 2004, Franks has continued to create vibrant, flamboyant and graphic pieces and this particular spring collection is no different.

The Camilla Franks SS 2011 line features a series of gauzy pieces, from jumpsuits to caftans to gowns, all decked in a melange of bold, bright hues. In this collection you’ll see cobalt blue mixed with red, vibrant citrus combined with purple and everything in between. The campaign photographs for the line, shown here, also feature the models sporting ‘dos as eye-popping as their clothing, in colors like pastel purple and cotton candy pink.

If you aren’t afraid of a little color—or a lot of it for that matter—then the Camilla Franks SS 2011 collection is right up your alley.
3.6
Score
Popularity
Activity
Freshness
Access Advisory Services