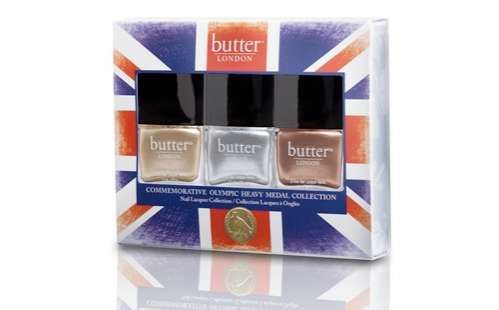 Shiori Mine — May 20, 2012 — Art & Design
References: butterlondon & racked
Share on Facebook Share on Twitter Share on LinkedIn Share on Pinterest
With the 2012 Olympics just around the corner, the butter LONDON Heavy Medal Collection will have your toes decked ready for the games. The set includes three medal-appropriate metallic shades — gold, silver and bronze. The company prides itself for its three formulas and fashion-forward swatches.

The British nail polish brand has released a number of other English-themed lacquers to commemorate notable events, such as the engagement of Kate Middleton and the Queen’s Diamond Jubilee anniversary. London has hosted the Olympic games on two previous occasions in 1908 and 1948. These dazzling polishes are inspired by the medals coveted by the top athletes from across the globe.

For those unable to attend the summer games in person, feel the electrifying competition by lacquering up with the butter LONDON Heavy Medal Collection.