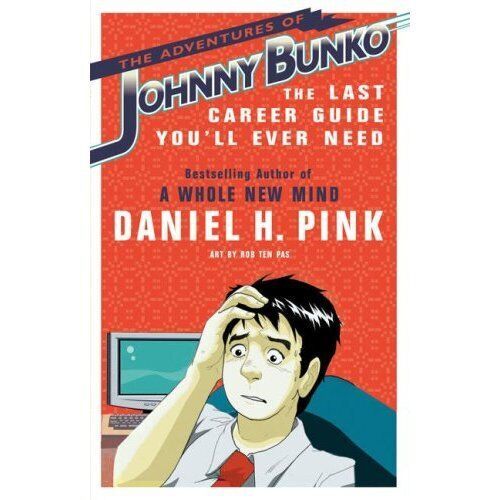 The Adventures of Johnny Bunko by Daniel H. Pink

Bianca — March 25, 2008 — Pop Culture
References: amazon & johnnybunko
Share on Facebook Share on Twitter Share on LinkedIn Share on Pinterest
Would you take advice from a comic book? Adults in Japan do, where manga, or comics, are hugely popular across all age groups. Japanese manga covers all topics, yet in the western world, there are no comics geared toward adults, and definitely none that could be found in the business section.

Daniel H. Pink is hoping to change that with the release of a manga career guide, The Adventures of Johnny Bunko, a book illustrated by Rob Ten Pas.

"Manga is becoming hugely popular in North America, but we're missing a whole genre," Pink says. "In Japan, there's manga for adults on business topics. We don't have that here. So I decided to create the first business book in manga for a western audience."

The book was designed for convenient enjoyment while also teaching six important business lessons. The manga business book, geared toward young adults entering the career world, is small enough to fit in a coat pocket, and brief enough for those with limited time or short attention spans. I read the entire book on the airplane in 35 minutes, and that included taking notes.

The book, which will be released April 2, 2008, is fun to read, infused with all the traditional oddities of modern day manga. It's about Johnny Bunko, a young 20-something man stuck in an office job that's running him down. There are long hours, he's treated badly, and he's not fulfilled in any way.

Frustrated on his way to grab lunch one day, Johnny stops by a new sushi restaurant. On his way out, he grabs a handful of chopsticks, a decision that would forever change his life as he soon would find they would help him unleash a magic genie. Shocked in his office cubicle, Johnny discovers the sexy genie, who is full of attitude, is a valuable career adviser. As his magical mentor, she teaches Johnny six very beneficial lessons.

Between the fun graphics and young slang, the business lessons are supplemented with little details that remind us this book is one of the times. The characters visit Starbucks, they joke about MSG and they cyberslack on YouTube.

"People today get their tactical career information online -- keywords to include in a resume, questions to look for in an interview, and so on," Pink says. "What they want from a book is what they can't get from Google: Big picture, strategic advice. That's what I've tried to do -- to tell a story that reveals the six lessons I wish I'd known 20+ years ago when I entered the workforce."

The book is fantastically written, and perfect for today's young who aren't willing to make the time to leaf through thick business books. It goes to show that length and time don't necessarily determine the value of content.

Pink proves that comics are not just for children, but can be a learning tool just as valuable as the next New York Time bestselling business books.

Could this be the beginning of a new genre of business books?