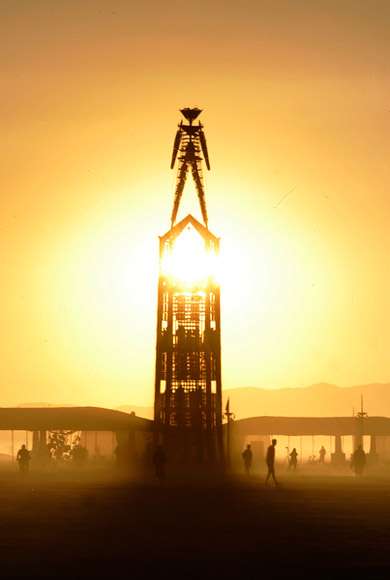 Bianca — September 1, 2008 — Art & Design
References: burningman & wired
Share on Facebook Share on Twitter Share on LinkedIn Share on Pinterest
Burning Man 2008, which ends today, has attracted thousands of fans, both in real life and virtually through the web, since it kicked off on August 25. Burning Man is about rebelling against branding, as represented by the iconic statue of a man seen at the event.

Close to 50,000 people make it out to the annual event in Black Rock Desert. Burning Man turns a dried Nevada lake into an “experimental community, which challenges its members to express themselves and rely on themselves to a degree that is not normally encountered in one’s day-to-day life.”

They call this place Black Rock City, and like in years past, this is where Burning Man 2008 took place.

There aren’t any rules, it’s up to the people how they want to run their community. Art plays a huge role in Burning Man, and every year, a new theme is given to participants.

“Participants are encouraged to find a way to help make the theme come alive, whether it is through a large-scale art installation, a theme camp, gifts brought to be given to other individuals, costumes, or any other medium that one comes up with.”

This year’s theme was American Dream.