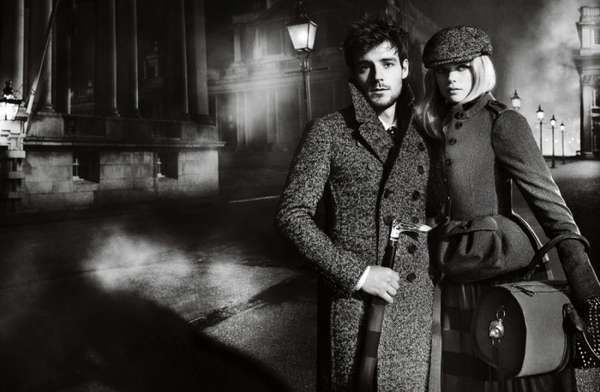 Meghan Young — May 30, 2012 — Fashion
References: burberry & fashiongonerogue
Share on Facebook Share on Twitter Share on LinkedIn Share on Pinterest
The Burberry Fall 2012 campaign may seem rather melodramatic, but it is also very idiosyncratic of London. From the typical fog in the backdrop to the cobblestone streets, Burberry's signature trench jackets fit in perfectly. Shot entirely in black and white, the ad campaign is given a cinematic aesthetic that plays off of the dramatic images taken.

Lensed by renowned photographer Mario Testino, the Burberry Fall 2012 campaign stars actress Gabriella Wilde alongside musician Roo Panes. The two talented individuals are captured at the iconic Royal Naval College in Greenwich, London, in some of the very best fall pickings this year from this label. Romantic, but not overtly so, the ad campaign will get and hold people's attention for many reasons.
4
Score
Popularity
Activity
Freshness
Get the 2023 Trend Report FREE