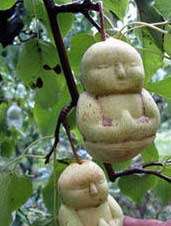 This form of bonsai fruit manipulation is created by encasing young pears in plastic molds shaped like kneeling, praying Buddhas with eyes closed. As the pears grow, they’re restricted by the frame around them, forcing them to take on the shape of the spiritual leader.

The Buddha pears were invented by a Chinese farmer, Gao Xianzhang, who has already grown 10,000 of these spiritual fruits which he plans on selling in Europe and the UK.

While the face on the Buddha pears appears peaceful and enlightened, these modified fruits put a slight knot in my stomach. I’d already feel guilty messing with nature, but then putting a Buddhist spin on it just seems wrong. Am I crazy?
5.8
Score
Popularity
Activity
Freshness