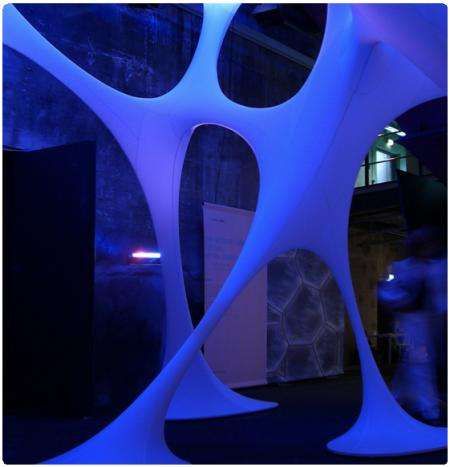 The Work of Chris Bosse

Life Fever — November 4, 2006 — Art & Design
References: chrisbosse.de & lifever.wordpress
Share on Facebook Share on Twitter Share on LinkedIn Share on Pinterest
Born in 1971 in Stuttgart, Chris Bosse was educated in Germany and Switzerland and worked in several European architecture firms. His postgraduate degree at the University of Stuttgart dealt with the implication of virtual worlds into architecture. With www.smoarchitektur.com (Mad Oreyzi) he developed the Bubble-Highrise for Berlin in 2002 (a+u 05:01). Since 2003 he has been working with PTW Architects in Sydney on many high-profile projects in China, Vietnam and Middle East. PTW has recently started a number of projects in various parts of Japan. The project for the National Swimming Center for Beijing 2008, called the Watercube, received the Atmosphere Award at the 9th Venice Biennale and is under construction since 2004. The MOÃ‹T Marquee in Melbourne explored his interest in unusual structures in a freeform interior based on the physics of champagne bubbles and minimal surfaces. The work is widely published and Chris guest-lectures at various universities.
5.7
Score
Popularity
Activity
Freshness
Get Trend Hunter Dashboard