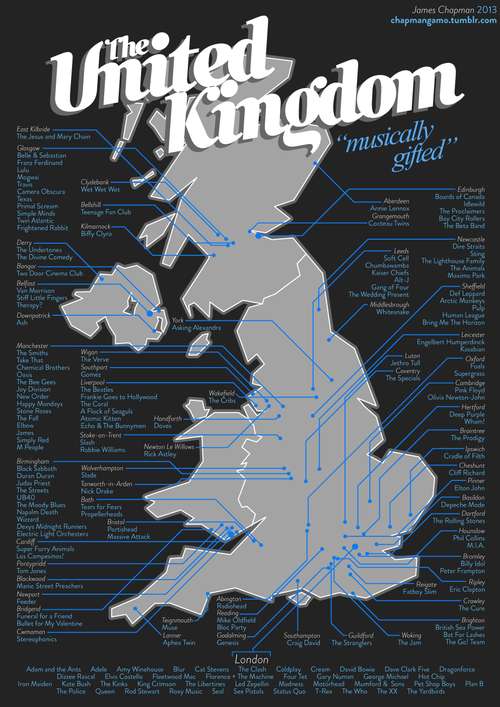 Andrew Sztein — March 13, 2013 — Pop Culture
References: chapmangamo.tumblr & laughingsquid
Share on Facebook Share on Twitter Share on LinkedIn Share on Pinterest
I may not be British, but it's a nearly indisputable fact that British Bands are some of the best in the world. From immortal classics like The Beatles, Genesis, Elton John and The Rolling Stones, to more contemporary acts like Muse, Mumford and Sons, Coldplay and The Chemical Brothers, British bands dominate the musical landscape, as well as Scottish and Northern Ireland-based bands.

It's in that spirit that James Chapman created the 'Musically Gifted' UK map. The incredibly detailed map shows where all your favorite British bands came from on the Queen's island. Perusing the map is actually a pretty educational musical experience, as you're bound to have a moment or two looking at it when you'll inevitably say, "THAT band is British?" The weirdest one I found on the map is Boards of Canada. I don't know, but there's something about that name that suggests they might be from somewhere else.
3.1
Score
Popularity
Activity
Freshness
Jeremy Gutsche Keynote Speaker